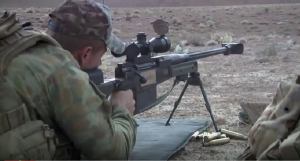 A SAS marksman reportedly targeted and killed three ISIS militants from a distance of 1,000mts.

Using a Barrett M82 .50 calibre rifle, the world’s most powerful sniper rifle, the SAS operative shot and killed three militants holed up inside a building.

Calling in an airstrike or utilizing heavy weaponry was deemed too risky due to the possibility of unnaceptable collateral damage. Thus, the task was given to a sniper, who took position about 1,000mts out from the objective.

He fired about 30 .50 rounds into the target building, almost demolishing a wall and eliminating the threat.

Munition from a Barrett rifle can successfully penetrate brick walls and other hard targets up to range of 1,800 metres.