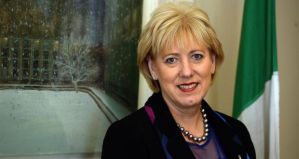 A group of protesters gathered as Minister for Arts, Heritage and the Gaeltacht, Heather Humphreys, delivered a speech at Moore St. during today’s 1916 celebrations.

The protesters chanted ‘Shame on you’ and ‘Humphreys out’, among other slogans.

It is understood that the protesters belong to the Save Moore Street group.

The protest stems from the minister’s successful challenge to a government’s decision to buy the site at 14-17 Moore St. because of its historical significance. The Easter Rising’s leader congregated there and decided to surrender.

Humphreys however stepped in and argued that other buildings on the stree, namely 13 and 18 and 19, are not ‘historically significant.’ The Save Moore Street group had been calling for the protection of the entire street due to its heritage.

The minister later claimed to be ‘disappointed’ by the protests, which completely drowned out her speech.