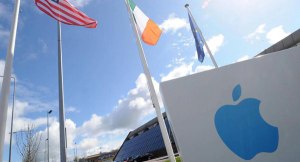 Apple boss Tim Cook has this evening reaffirmed the company’s committment to Ireland, on a day when a landmark EU ruling puts the Irish Government in the somewhat difficult position of having to demand Apple upwards of €13bn in back taxes.

The record amount arises due to an alleged ‘sweetener’ tax deal offered to Apple in exchange for setting up here. The deal amounted to Apple having to pay close to nought in Corporation Tax for the years between 1991 and 2015.

Speaking on the issue, Mr. Cook said: “We never asked for, nor did we receive, any special deals. We now find ourselves in the unusual position of being ordered to retroactively pay additional taxes to a government that says we don’t owe them any more than we’ve already paid.”

The crux of the case lies in the fact that there are allegations stating that the company had attributed European sales to a non-existent ‘head office’, hence the corporation was able to mark the profits it derived from its EU sales through Ireland, rather than the country where the item was actually sold in.

Apple supports thousands of jobs here, and it recently announced an expansion that would create an extra 1,000 jobs.

The €13bn windfall represents a double-edged sword for the Goverment, however. On the one hand, it’s a massive lottery win that could solve the domestic housing crisis and many other issues in one swift stroke, if the monies were to be allocated sensibly.

On the other hand, if the Government does force its hand and collects the money, it could spook any potential international investors considering setting up base here.

Both Apple and the Minister for Finance Michael Noonan have said they will appeal the ruling.