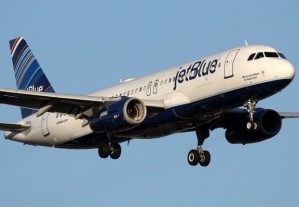 Back in the early 1960s, the US and the then USSR were playing a dangerous game of military escalation that almost triggered thermonuclear war.

The USSR were using Cuba as a proxy in a high-stakes display of firepower, and when some US reconnaisance planes spotted a significant build-up of military hardware on the US’s backyard -including medium-range and intermediate-range ballistic nuclear missiles (MRBMs and IRBMs) sites-, the brown stuff really did hit the fan.

The escalation directly led to the Cuban Missile Crisis of ’62, plus trade embargos, blockades, and more relevant to this piece, Cuba imposed a ban on all incoming flights from the US, a ban that has lasted to this very day.

History is being written today, however, as the first commercial flight between the US and Cuba in five decades takes off from Fort Lauderdale in Florida, bound for Santa Clara in Cuba.

JetBlue’s landmark flight heralds big business, too, as other airlines are likely to establish links with Cuba in the near future. The forecast is for up to 400 flights weekly between the two countries, and with fares quoted as low as US$99 (€88) one way, most Americans have no excuse to fly to the beautiful island of Cuba.