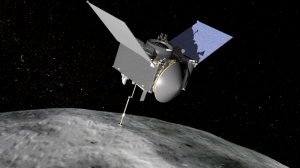 NASA has initiated the OSIRIS-REx mission, launching an unmanned probe on a seven-year journey across space to rendezvous with asteroid Bennu and return to Earth with samples gathered from the rock.

The probe successfully lifted off from Cape Canaveral Air Force Station at 7:05 p.m. EDT (2305 GMT) on Sept. 8. If everything goes as scheduled, the probe will reach Bennu in August 2018, take some soil samples from its surface, and return to Earth in September 2023.

Scientists chose Bennu out of thousands of other potential targets primarily because of its size, orbit, composition, and more importantly, its age. The rock is a sort of time-capsule that holds material dating back to the origins of the Solar System. The science team behind the mission hopes to acquire further knowledge about the formation of planets and the Solar System itself.

Bennu’s indeed cataloged as a hazardous object, as its orbit may take it into a direct collision course with Earth late in the 22nd century.