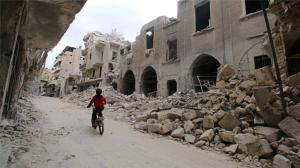 The war-torn city of Aleppo in Syria has come under heavy bombardment once again, after a fragile ceasefire collapsed.

Five aircraft, said to belong to the Russian air force, flew over the city yesterday, dropping heavy weapons on rebel-held areas. Local reporters said that cluster munition and incendiary ordnance were used during the latest attack.

The city of Aleppo has largely been under rebel control since 2012. Forces loyal to Syrian President Bashar al Assad have maintained a constant siege ever since.

The latest ceasefire effort all but ended after a convoy ferrying humanitarian aid into the besieged city was bombed on Monday, killing 20 people.