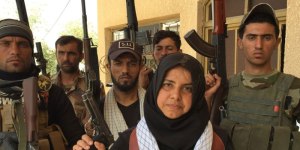 While most Irish housewives use their pots to cook cabbage and the like, things inside the kitchen are somewhat more complicated in the hellish, war-torn Middle East.

Enter 39-year-old Wahida Mohamed, better known as Um Hanadi. After losing two husbands, several family members, and some domestic animals to the savagery of ISIS, the self-declared ‘housewife’ vowed to take revenge and wage brutal war against her foes.

Commanding a 70-strong, all-male militia, no-nonsense Um Hanadi now strictly applies the ‘eye-for-an-eye’, or rather a ‘head-for-a-head’ policy. Any ISIS fighter or prisoner that falls to her group is beheaded, and the head is cooked inside a slow-burning pot.

In recent interviews, she boasted of having taken out 18 ISIS operatives herself, though she did say that her group ‘fights as a family.’

Having struck fear in the heart of ISIS, Um Hanadi is now at the top of their kill list. She has reportedly survived six assassination attempts thus far, and her body is riddled with shrapnel after car bomb attacks. She bears a 15-shot 9-mm Beretta sidearm at all times.

ISIS operatives are particularly bent on taking her out, as they believe that being killed by a woman tears up their ticket to heaven.

Um Hanadi admits ‘I fought them. I beheaded them. I cooked their heads, I burned their bodies.’