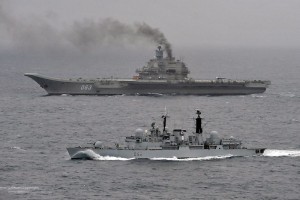 There is a heightened state of military readiness among NATO countries, as fleet of Russian warships will soon steam towards the English Channel.

Two Royal Navy destroyers are on station, ready to intercept the Russian taskforce, which is suspected to be heading for Syria to bolster military assets on the ground. Airborne NATO assets are also on alert.

The taskforce includes Russia’s only aircraft carrier, the Admiral Kuznetsov, and a number of other capital ships. A number of Sukhoi Su-33 Flanker multirole fighter aircraft are on board the carrier. These aircraft are likely to be used to carry out bombing operations on rebel-held areas of the besieged city of Aleppo in Syria.

The Russian warships’s intended course will bring them right through the English Channel, a route that has been deemed to be used as a show of force. It is not usual for Russian ships to navigate this route, instead they usually sail down the Black Sea and on to the Mediterranean through the Bosphorus Strait.

The military buildup is the largest Russian deployment since the Cold War, and it coincides with a period of heightened tensions between opposing factions in Syria and elsewhere. This latest move by the Russians is likely to inflame the situation even further.

Once on station in the Mediterranean, the Admiral Kuznetsov will likely initiate combat operations against targets in Syria, a short flight time away.