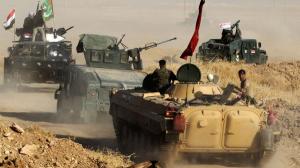 Military observers on the ground around the besieged city of Mosul in Iraq report a large number of civilian casualties, allegedly inflicted by ISIS militia.

The bodies of at least 120 civilians have been discovered inside houses and in shallow graves, most of them with multiple gunshot wounds. It remains unclear which faction carried out the killings, however.

Some 5,000-6,000 were dug in around Mosul at the outset of the battle. Vastly outnumbered by a coalition of around 90,000, ISIS militias have sustained heavy losses since the start of the offensive, though they are fighting doggedly to retain control. The bitter struggle for the city is thought to be ISIS’ last stand in Iraq.

The jihadi fighters have mined all access to the city with Improvised Explosive Devices (IEDs) and laid booby traps all over, creating a hazardous environment indeed.

Specialist engineering teams are on the ground, but progress is slow, and clearing has to be done house by house.