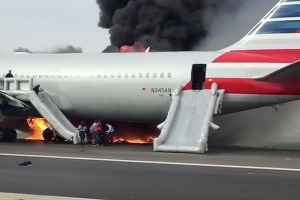 American Airlines Flight 383 was about to initiate its take-off run when the starboard engine caught fire. The crew executed an aborted take-off procedure and halted the aircraft.

Emergency slides were deployed, and all 170 passengers and crew were evacuated in under two minutes. 20 people required medical attention, all for minor injuries.

A spokesperson for American Airlines said that the fire had been caused by a ‘uncontained engine failure’. These ‘uncontained’ events involve engine parts becoming loose, large birds sucked into the turbine, or parts that fail due to wear.

The fire burned so intensely that the outer part of the starboard wing melted. The outcome could have been much worse, however, had the fire broken out after the jet became airborne.

The aircraft involved in the incident, a Boeing 767, was manufactured in 2003 and has flown over 47,000 hours, accounting for 7,500 takeoff-landing cycles.