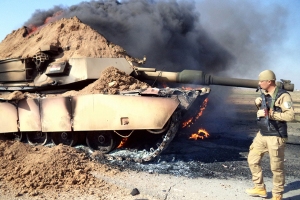 Though obscure by dust and dirt thrown into the air by continuous shelling, the Mosul low-rise skyline is within sight of forward elements of Iraqi special forces, the American-trained Counter Terrorism Force (CTF).

CTF operatives are now about 1.2m away from the outskirts of ISIS-controlled Mosul, and scouts report militia fighters darting in between houses, and heavy concentration of vehicles in the area. These vehicles are suspected to be packed with explosives, ready to ram advancing forces.

The situation on the ground is tense, as ISIS militia know that losing Mosul will mean their inevitable end. The city had been designated to be the capital of the new, so-called ‘caliphate.’ A decisive victory for the Iraqi-led coalition here will certain spell ISIS’ demise in the country.

A bitter, bloody, and costly struggle awaits the coalition troops. ISIS have recalled hardened fighters into the city, and conservative estimates put the number of civilians still trapped inside Mosul in the tens of thousands. ISIS have been known to massacre personnel attempting to flee the city, including women and children, and use civilians as human shields to deter direct confrontation.

Morale is said to be high among Iraqi troops, with many no doubt seeking retribution from years of ISIS oppression.

The final assault on Mosul is expected to begin soon.