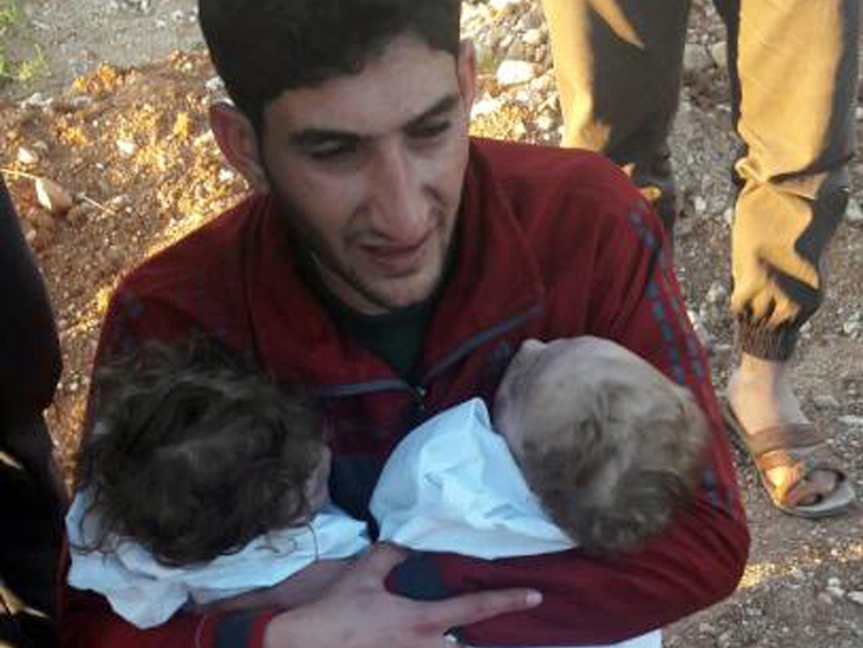 For many Syrian families, the world ended shortly after sunrise on April 4, 2017. That morning, man-made death would grip their throats and drain their lives with cruel efficiency.

Air raids over Syrian airspace have been commonplace for the last six years, as the nation’s air force -supported by Russian aircraft- drop ordnance on their own people on a regular basis.

Civil war has been raging for more than half a decade. Up to 400,000 people have died, been injured, or fled the war-torn country that its president, Bashar al Assad, is determine to destroy.

But the air raid on Tuesday morning was to be different from the rest. Fighter bomber jets of yet undetermined allegiance flew over the rebel-held area of Khan Sheikhoun, in the Idlib region.

Idlib is one of the last bastions held by rebel factions that stand against Assad’s tyranny. After a long and bloody struggle in Aleppo, rebels are losing ground. And Assad is determined to annihilate anyone opposed to his terror regime. He says that the only way is ‘victory.’

On April 4, Khan Sheikhoun residents woke up to the sound of jet engines roaring overhead. Up in the skies, a pilot presumably requested permission to drop the weapon. Soon, ordnance began its final descent on the civilian target.

Witness reported hearing the weapon hit the town, but strangely, no explosion followed. The bomb carried a far deadlier cargo than high explosives.

Many families living in the immediate surroundings of the drop site stood no chance. Poison gas crept in, turning people’s beds into their tombs. Men, women, and children began suffocating as soon as the chemicals took hold of their bodies. For these residents, it was all over in minutes. Those living further away would suffer far more.

The weapon’s deadly cargo began spreading death around Khan Sheikhoun. Victims fell to the ground, twitching, convulsing, and gasping for air. Children were the worst sight. Their small bodies succumbed to the poison quicker, their little eyes wide open in sheer terror as they could no longer find air to breathe.

The deadly agent soon began evaporating, its potency gradually diminishing as the chemical broke down in the atmosphere. Over 70 people were left dead in its wake, many children among these. Their deaths were not easy. Suffocation due to acute respiratory distress ended their lives, their mouths foaming as lungs produce fluid in a desperate attempt to flush out the deadly chemicals. But all in vain.

In the wake of such atrocity, the world issues its deepest ‘consternation’. Again.

Assad has used chemical weapons in the past. Back in 2013, over a thousand people died after being exposed to the deadly nerve agent sarin in the Damascus suburb of Ghouta. In the aftermath of such grievous crime against humanity, the US considered direct military intervention in the region, but the Obama Administration relented after Assad agreed to hand over Syria’s stockpiles of chemical weapons. Nevertheless, chemical attacks have continued regularly since.

Both the US and Russia have repeatedly issued promises to ‘punish’ Syria if chemical weapons are used on civilians. Yet, neither nation has honoured such vow, and according to the Trump Administration, removing Assad from power is no longer a stated aim on its policy, unlike Obama’s.

Assad’s regime has never shied away from killing its own people to legitimize its own hold on power. Ever since the insurgency began back in 2011, Assad and his Russian allies have used all weapons at his disposal to quell the uprising against him. The city of Aleppo was systematically razed to the ground to flush out rebel groups, for instance.

Now, the world bears witness yet again to the atrocities committed by one power-driven man. Tuesday’s events bear a striking resemblance to the actions of another dictator, Saddam Hussein, who mass-murdered almost 5,000 Kurdish people in the town of Halabja, Irak, on March 16, 1988. At Saddam’s behest, warplanes dropped a multitude of chemical weaponry on the Kurds that day, leading to an indiscriminate massacre of untold proportions.

Now, Assad’s actions have stunned the civilized world once again. Governments are likely to talk tough and behave meekly, as military intervention in the region by either the US or any other Western power would further de-stabilize the region, and likely lead to a global conflict.

In the wake of Tuesday’s abhorrent atrocity, between 70 and 100 people (many of them children, let’s not forget) died in horrible, nightmarish circumstances. This has happened before, and it’s likely to happen again, as Assad’s regime knows that Russia is on his side.

The US and Russia have been fighting a proxy war in the region for years. Any overt military intervention would trigger a Russian response, which could lead to total war.

Yet, at the same time, the US’ disengagement might lead to the rise of further extremism, as new groups seek to take advantage of this relative impunity.

Khan Sheikhoun will now become another shameful black mark on humanity’s history book, a book which is already full of dark stains.