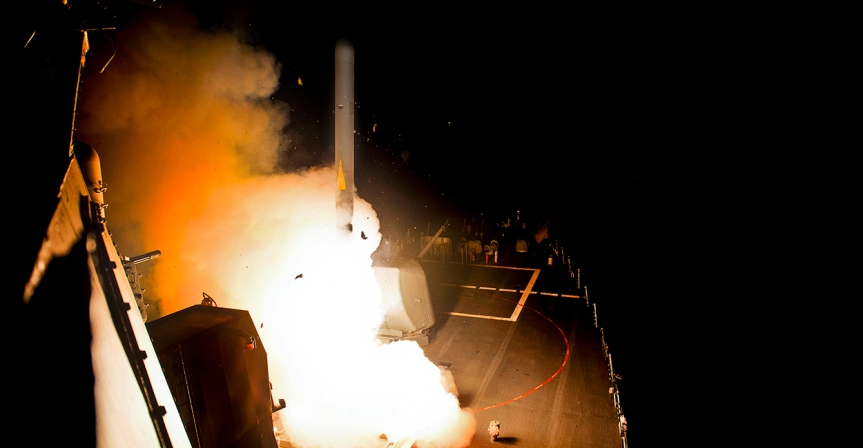 Photo credit: US Navy via ABACAPRESS.COM

The Tomahawk strike launched over Sharyat Airfield in Syria last Friday signified a marked escalation of the US involvement in the war-torn country.

Never before had US assets been directly used in a military confrontation in Syria, though America has long been indirectly involved in the conflict, conducting a proxy war with Russia.

The target was chosen because it is the suspected jump point for the aircraft that had deployed chemical weapons on the civilian population in the town of Khan Sheikhoun three days prior.

The US naval assets rained a barrage of 59 Tomahawk cruise missiles down on the twin-runway airfield, hitting storage depots, air defence sites, and other facilities. A number of aircraft were also destroyed in the attack, and six personnel were reported to have been killed.

The Tomahawk cruise missile has a range of over 600nmi, thus enabling long-reaching strike capability its operator. However, the weapon requires a large amount of fuel to propel it to its target, which significantly reduces the size of its warhead. With a price tag of $1.5m apiece, a single Tomahawk’s destructive power is low in relation to its cost. To compensate for this weakness, operators normally launch a barrage of missiles to maximize the strike’s effectiveness.

Crucially however, the actual runways did not sustain heavy damage, and remained operational. Some observers have questioned the effectiveness of the strike.

Russian authorities swiftly moved to criticize the US involvement, stating that the United States had ‘crossed a red line’, and also questioning the legality of the strike.

Both countries have been engaged in a thinly veiled confrontation in the Middle East country ever since the Syrian Civil War began almost six years ago. The Russian government has propped up the Syrian army, providing air assets and other equipment. Together with Syria, the Russian air force has access to a dozen airfields dotted around the country, so the assault on Sharyat has done relatively little to reduce overall combat effectiveness.

Furthermore, a Russian naval asset, the Admiral Grigorovich frigate, has now been stationed in the Mediterranean.

Admiral Grigorovich is a force to be reckoned with. The vessel is equipped with Kalibr-NK anti-ship and coastal missiles, Shtil-1 defensive missile system, a 100mm artillery cannon, anti-aircraft equipment, and torpedoes. It also carries an air wing for close ground combat support in the form of Ka-27 or Ka-31 attack helicopters.

The presence of such mighty asset in the Mediterranean will surely become a cause forconcern to the US Navy and its allies.

But Trump has had a change of heart it seems, as he has now turned his attention to the Syrian conflict. He referred to the events at Khan Sheikhoun as a ‘heinous’ crime, and few would dispute that this is true. 89 civilians -30 children among these- died a horrific, nerve-agent induced death.

Few would also dispute that al-Assad was the man behind the orders to carry out such atrocity. It is not the first time that the Syrian President orders chemical strikes on his own people, after all. Back in 2013, over a thousand people died after being exposed to the deadly nerve agent sarin in the Damascus suburb of Ghouta. In the aftermath of such grievous crime against humanity, the US considered direct military intervention in the region, but the Obama Administration relented after Assad agreed to hand over Syria’s stockpiles of chemical weapons. Nevertheless, chemical attacks have continued regularly since.

Nevertheless, the Trump administration now finds itself in a perilous position. The president may very well intend to oust Bashar al-Assad from power, but doing so would be in direct conflict with previous and current foreign policies for two reasons: One, Russia backs the Syrian Government 100%, and Trump and many of his close supporters are known to have ties with the Russian President Vladimir Putin. It is widely suspected that Russia interfered in the last US election, possibly affecting its outcome in the favor of Donald Trump. Also, a number of businessmen associated with the president have murky financial interests over in Russia. Trump has in fact operated under a cloud of suspicion because of the Russian connections ever since he rose to the top job.

And two, the rebel army conducting operations against Bashar al-Assad is known to include ISIS- associated factions, which poses a great moral quandary to Trump and its advisors.

This situation is reminiscent of a CIA-backed Osama Bin Laden back in Afghanistan, during the Soviet war in the country. Though the claims were never officially substantiated, it is widely accepted that the US fell prey to its own creation, after the CIA trained and armed rebel factions fighting against the Soviet invasion of Afghanistan. Later on, these same factions would turn against the US and would use the weapons provided to wage war against American interest elsewhere.

On the brink of war

The strike on Sharyat Airfield has had a profoundly destabilizing effect on the precarious balance of power in Syria.

Such openly direct intervention of the US is likely to inflame the already strained relations between the US and Russia. China is also a keen supporter of both Russia and Syria, and if war were to break out, the US would find itself in a perilous situation indeed.

The Chinese Army is a very powerful force indeed. Should armed conflict be sparked in Syria, North Korea may decide to initiate military operations and move against South Korea, for instance. China also backs North Korean interests, so it may lend support to Kim Jong Un’s regime. At the same time, the US would be forced to defend its South Korean allies and enter into an armed confrontation against China and North Korea. Concurrently, Russia may forge an alliance with these largely communist countries, forcing the US to wage war in two fronts.

Should this scenario develop as postulated here, other countries may seize the chance and take sides, sparking a global conflict.