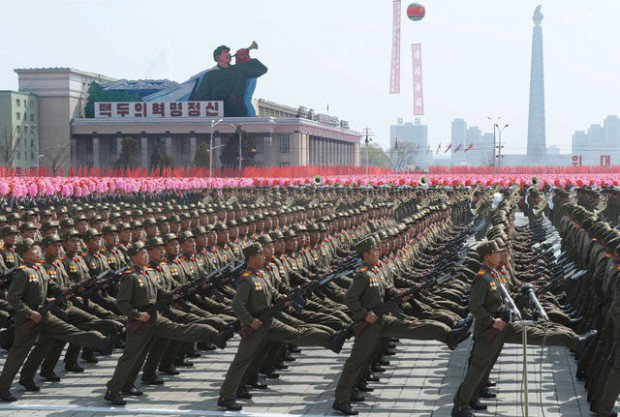 Yi’s words come amidst a heightened state of military readiness around the Korean Peninsula.

Earlier this week, the Chinese Army moved 150,000 troops close to the country’s border with North Korea as a large US naval fleet steamed towards the area.

A carrier group, led by the Nimitz-class aircraft carrier Carl Vinson (CVN-70) was diverted from training operations off the Australian coast and dispatched to North Korean water earlier this week. Such move caused considerable upset to the North Korean leader, Kim Jong-Un, who said that the regime will counter any “reckless acts of aggression” with “whatever methods the US wants to take.” Kim referred to the deployment as a “grim situation.”

Beijing has been pushing for a diplomatic solution to the standoff, but the US appears bent on sparking a military confrontation.

Meanwhile, Moscow sources also advocate a “politic-diplomatic reconciliation” between the opposing sides, and warn against any act that may be perceived as a provocation.

North Korea has no love lost for the US. During the Korean War in 1950-1953, the American army bombed its foe mercilessly, killing at least 400,000 North Korean soldiers.

Analysts believe that the military buildup in the region may very well be a precursor to war. Apart from the mighty Carl Vinson strike group, two US destroyers equipped with Tomahawk cruise missiles are also on their way, and long-range B1 Lancer and B2 Spirit bombers are on stand-by on Andersen Air Force Base in the Pacific island of Guam.

Speaking about the tense geopolitical situation in the region, the North Korean Deputy Foreign Minister issued the following statement during an interview with AP last Tuesday:

“If the US dares opt for a military action, crying out for ‘pre-emptive attack’, [Pyongyang] is ready to react. We will hold the US wholly accountable for the catastrophic consequences to be entailed by its outrageous actions.”

The world is now closely watching the events unfolding in the region, with many seeing war as ‘inevitable.’