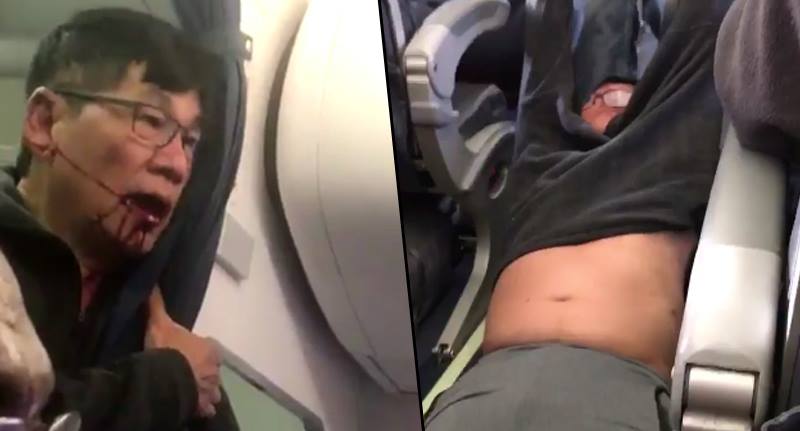 The battered, bruised, and bloodied face of 69- year-old doctor David Dao made international headlines a few days ago, after the man was forcibly removed from an overbooked United Airlines flight.

Mr. Dao suffered a broken nose requiring reconstructive surgery, a concussion when he hit his head on an armrest, and lost two front teeth during the ordeal, which was filmed by a number of passengers. Apart from the physical battering, he suffered the indignity and humiliation of being dragged along the aircraft’s central aisle in a semi-conscious state in front of all other passengers and crew.

The incident happened while on the ground at Chicago O’Hare Airport, on board UA Flight 3411 on Sunday, April 9.

This grim episode has become a PR disaster for the airline, which has seen its stock value plummet in its wake. Almost $1bn was wiped out of the company’s worth in little over 48h.

United’s CEO, Oscar Munoz, was quick to issue a half-assed apology that was tantamount to blaming the passenger’s ordeal on his own non-compliance when requested to give up his paid-for seat to accommodate some airline personnel. Mr. Munoz’s tone in subsequent public statements became increasingly contrite as financial losses mounted. He would go on to personally apologize to Mr. Dao, saying that such behaviour does not become the “United family”, and offered refunds to every passenger on Flight 3411.

Mr. Dao is now gearing for a well justified lawsuit that will hit the airline hard.

But how was United Airlines able to behave so brazenly and recklessly, potentially exposing itself to a six-figure plus lawsuit, and a huge loss of public respect?

The simple answer, because the airline thought it could get away with it.

The entire flying experience is stressful enough as it is nowadays. From the long queues at security, waiting for boarding, and then spending time inside a packed aircraft, the whole thing can take a toll on your endurance, even if you are a seasoned flyer.

The last thing a traveller needs is to witness a brutal, corporate-enforced assault on a fellow passenger.

Yet, this is exactly what happened on this fateful flight. Mr Dao’s forceful ejection took place in full view of everyone on board. One can only imagine what went through the minds of the other passengers, thinking that they may very well be ‘next’ on the airline’s hitlist.

Social media soon erupted in a violent backlash against United. Flight cancellations and tearing up of ‘Frquent Flyer’ cards inundated the internet. Memes and other media protests targeted the airline’s wanton behavior.

At the heart of the issue lies the murky tactic of overbooking. Mr. Dao was reportedly asked to give up his seat, along with three other passengers, so that United’s own staff could be accommodated.

Overbooking is a hitherto legal mechanism by which most US airlines can compensate losses in case of no-shows. It is a simple enough business trick to maximize profits, based on passenger trends and other mathematical estimations.

While not an exact science, it is common practice. If there are more passengers than seats, the airline is legally entitled to select random passengers for ‘bumping’. People will first be asked to give up their seats on their own volition. If nobody takes up the offer, passengers can be ‘involuntarily’ ejected.

This process is supposedly ‘random’, but some bumping guidelines do exist, according to industry experts. Some airlines will bump those on the lowest fares first, or those who checked in last. Bumping criteria varies.

Passengers booted off flights are entitled to compensation, which can range between $400 and $1,350, depending on flight length and a number of other factors.

Up to now, airlines have exerted absolutely power  over their passengers. We gladly give them our money and meekly board their planes, thankful to be taken to our destinations and be quiet about it. Most of the time, things go smoothly and there is little reason to complain, other than the quality of the food on board, or smelly passengers next to us.

United’s CEO initial response to the incident goes to show the dismissive and cavalier holier-than- thou attitude towards a passenger’s plight. There was an attempt to make the victim in this case to be the instrument of his own downfall because of his refusal to give up his seat to begin with. Mr. Dao is a doctor, and had to be in his practice the next day, no matter what.

But corporate hubris backfired spectacularly in this instance, wiping a large chunk of United’s stock value off the market, and dragging the airline’s ‘Fly the friendly skies’ motto along a bloody aisle along with Mr. Dao’s body.