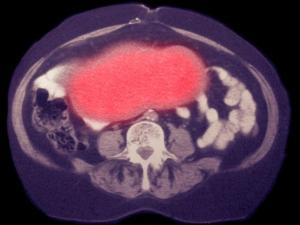 A new experimental drug has shown extremely promising results in the treatment of metastasized ovarian cancer, with trial doctors going as far as saying that it is the ‘biggest breakthrough ten years.’

Ovarian cancer may cause few or no symptoms when it first develops, so it is commonly detected at an already advanced stage, making treatment options difficult. About a fifth of cases actually present with distant metastases, with most of these being terminal and requiring supportive or palliative care. Ovarian cancer kills an average of 4,000 people a year in the UK alone.

A new drug, ONX-0801, is currently being tested in a phase one clinical trial conducted at the Royal Marsden cancer hospital in London. The compound has shown extremely positive results so far, after seven out of fifteen women who were administered the trial drug experienced substantial tumour shrinkage.

Notably, ONX-0801 was only being tested for safety, but the unexpectedly beneficial therapeutic results encouraged the investigators to quickly move to further trials.

ONX-0801 was administered to women who had poor or negligible therapeutic response to standard chemotherapy treatment.

Though initial results regarding the therapeutic outcomes of ONX-0801, further research and trials are needed to confirm its viability in the fight against ovarian cancer.