The Cassini craft no longer exists, after taking a final dive into Saturn’s atmosphere.

Its instruments maintained contact with Earth until the last seconds of the probe’s remarkable journey across the Solar System, sending data back to Earth in almost real time.

The craft travelled nearly 5 million miles since its launch from Cape Canaveral in Florida back in 1997. During this time, Cassini beamed home over 250 million images, uncovering amazing facts about Saturn, its moons, and other celestial bodies in the Solar System.

The nuclear-propelled craft had almost exhausted its fuel, a point after which it would have become uncontrollable. To avoid a random collision with one of Saturn’s moons or Saturn itself (which could have led to contamination of the soil by Earth bacteria), engineers decided to put Cassini in a terminal dive through Saturn’s atmosphere, to ensure it burned completely. 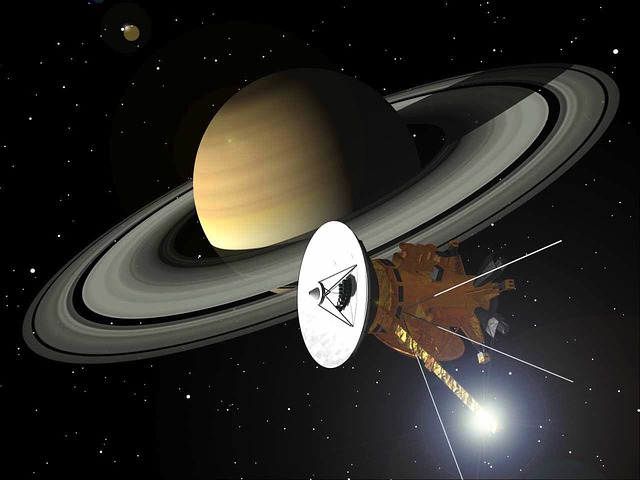 The Cassini mission will make its last transmission ever in less than 48 hours, after a journey of nearly 5 billion miles across space.

Cassini’s grand finale will come on September 15, when the craft plunges down Saturn’s atmosphere, destroying itself in the process.

The probe was launched on October 15, 1997, and completed a series of flybys of Venus and Jupiter before setting course to Saturn, the planet where it spent most of its mission time.

In April this year, Cassini was set on a collision course with Saturn. The probe’s final destination saw it fly 22 times between the planet and its rings, sending never-before-seen close-up images of such enigmatic celestial body.

Cassini’s swan song will be the transmission of scientifically valuable data during its terminal dive into Saturn, for as long as the craft’s thrusters can keep its antenna pointed towards Earth.

Cassini is on the final stage of its 20-year long spacefaring mission to the farther reaches of the Solar System. The probe captured the footage during its final orbit of Saturn and Titan.

Saturn’s largest moon is an inhospitable world, about 50% larger than Earth’s own satellite, and the second largest in the Solar System. It orbits Saturn once every 15 days and 22 hours. Scientists believe that Titan holds massive amounts of liquid hydrocarbons, amounting to more than the known oil and natural gas reserves here on Earth. During an earlier fly-by in 2013, Cassini beamed data back to Earth that enabled astronomers to elucidate that Titan’s deep canyons were carved by liquid methane.

Titan and Earth are similar in many ways, in fact. Both worlds have seas and rivers, and a rain-producing atmosphere. The major difference is that while liquid water flows through our planet’s river systems, Titan’s are filled with a dark fluid that scientists believe to be liquid methane.

Cassini’s final journey will take place on September 15 this year. The craft will fly straight into Saturn’s atmosphere, where it will burn up in a blaze of glory. By then, Cassini will have completed an epic voyage of some 2.2bn miles across known space. 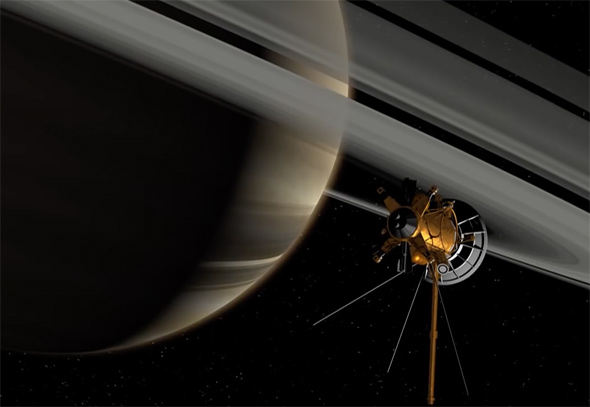 The Cassini probe has accomplished an historic feat in space exploration today, after becoming the first man-made object to successfully fly between Saturn’s rings and the planet itself.

Cassini executed a perfect dive through the 1,500 miles-wide gap earlier today, causing great excitement inside Mission Control back on Earth.

The manouever was not without its risks, as controllers feared the probe may collide with unseen debris orbiting the planet. However, their daring gamble paid off, and Cassini flew through the gap unscathed. Today’s was the first of a further 22 planned gap-runs at speeds of nearly 80,000 mph.

Today’s flyover took Cassini to within 2,000 miles of Saturn’s upper cloudy surface. The next runs will take about 7 days to complete, and the craft is expected to gather invaluable scientific data during this period.

Cassini is nearing the end of its 20-year long mission to Saturn. After orbiting the planet for 13 years, controllers have set the probe on a ballistic course, which will end on September 15 at 9:45 a.m. GMT (6:45 a.m. ET), when it burns up in Saturn’s atmosphere.

Little was known about Saturn before Cassini began its mission. Back in 2004, the probe beamed data that proved key to charting the planet and its moons.

The Cassini spacecraft has revealed some interesting data about Enceladus, one of Saturn’s moons.

Enceladus, which takes its name from a Giant in Greek mythology, features an icy surface beneath which a vast ocean of liquid water is thought to exist.

More interestingly, gigantic plumes of gas rise out of the moon. These plumes contain hydrogen, which indicates the presence of chemical reactions similar to those that happen at the bottom of the oceans here on Earth.

On our planet, these vents teem with microbial life, which raises the possibility that similar lifeforms may exist elsewhere in the Universe.

Earthside, microbes feed on hydrogen venting out from the planet’s crust, so the same process may be taking place in Saturn.

Cassini has been performing flybys around Saturn for 13 years. The probe will soon enter its final cycle of 22 more orbits before crashing into the planet’s atmosphere around September next.